When [the Magi] had gone, an angel of the Lord appeared to Joseph in a dream. “Get up,” he said, “take the child and His mother and escape to Egypt.  Stay there until I tell you, for Herod is going to search for the child to kill Him.” So he got up, took the child and His mother during the night and left for Egypt, where he stayed until the death of Herod.  And so was fulfilled what the Lord had said through the prophet: “Out of Egypt I called My Son.” (Matthew 2:13-15)

I’ve long believed that the central theme in Scripture, from the story of fall in Genesis through the Revelation of Jesus Christ, is the total redemption of GOD’s creation.  In Genesis, we see it in the prophetic word announcing the ultimate victory of “the seed of the woman.”   We see it hinted at in GOD’s covenant with Noah.  We see it at the divinely caused confusion at the Tower of Babel that prevented humanity from early self-destruction.  We see it in GOD’s covenant with Abraham that led to the formation of, provision for, and protection of Israel through whom would come the Savior.  We see it in the promises made to David that his own heir would sit on his throne forever.  We see it in every exhortation and warning of the prophets to trust GOD and to repent from sin and evil.

We see it in the incarnation of the Word, Christ Jesus, GOD’s peace offering to broken humanity, and in whose life is light and in whose way is healing and everlasting life.  We see it at Pentecost when the Holy Spirit fell upon all flesh, and who gave power to those ready and wanting to receive. And we see it in the continuing victory of the Church despite its own shortcomings and all efforts to discount it, disable it, and crush it. Worldwide, the reign of Jesus is growing, not shrinking; and His disciples await the zenith and culmination of Earth’s history with His return.

The truth is that GOD has not allowed anyone or anything to stop His plan to redeem the work of His hand.  Herod tried in a most savage way, but he was thwarted–“take the child and His mother and escape to Egypt.  Stay there until I tell you, for Herod is going to search for the child to kill Him.”  The Caesars and many subsequent power structures have tried to destroy the vision and promise wrought by “this child,” continuing even today.

“WITH [GOD] , YOU’LL HAVE ENDLESS OPTIONS”

GOD however, does not run out of options when it comes to ensuring the work of redemption.  And He does it in the most creative of ways.  For instance, He gave Elisha’s servant a vision of the mighty army of heaven ready to fight against the enemy threatening the destruction of His chosen people.  Later, He introduced an immigrant Moabite woman (Ruth) to a Judean named Boaz and they became the great-grandparents of King David.  He used the aged and reformed profligate, Solomon, to teach us about godly wisdom.  He used Paul’s imprisonment as a way for Paul to witness to the Roman political hierarchy about Jesus.  The examples go on and on.  Attempts to marginalize GOD and His plan have been and are been made.  Those of the past were proven to be ineffective works of straw.  Those of the present and future will be proven to be unwise, irrelevant and ineffective.  GOD always has an option.

The Apostle Paul refers to the status of the faithful as being in Christ, meaning simply our lives have become one with Christ’s, by faith and the will of GOD.  As such, each one of us is an agent and a servant in GOD’s redemptive story; and GOD plans to use us, and does.  In our weakness, it’s easy to lose sight of this truth.  In our weakness, we sometimes feel overwhelmed by life’s challenges, by felt needs not realized, by the weight of our responsibilities, and by our inability to see better options.  But GOD has an option we generally don’t see…until He chooses to reveal it. 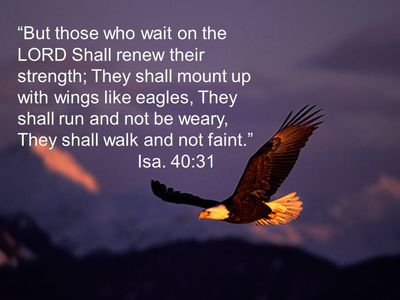 Perhaps a prayer we can pray is to be more trusting of Him with our lives, particularly when we feel like we’re on life’s roller coaster.  I’m sure Mary and Joseph felt that way a lot.  Remember, each believer plays a part in GOD’s grand plan of redemption. Let’s focus on discovering and playing our parts.  How He takes care of us and what He does through us is all up to Him and His creative will.  The story of redemption is one story, and you and I have a part if we are in this same faith.  Recall what Jesus said, “If you remain in Me and I in you, you will bear much fruit…” (John 15:5).

In the midst of living our lives, caring for children, going to work, doing work around the house, paying the bills, and doing our best to live faithfully, we may be able to see what that fruit looks like and to watch it grow on the vine…or we may not.  Either way, our job is to be in Christ, to remain Him, and to “trust in the Lord with all of our hearts, leaning not on our own understanding, acknowledging Him in all our ways, and He will direct our paths (Proverbs 3:5-6), just like He did for Joseph that night.

Nothing, nothing will successfully get in the way of what GOD is doing.  He’s got infinite options, including more than enough for you.

May GOD Bless You Richly

1 thought on “The Gift of Infinite Options”