I want to acknowledge and say thank you to all the men and women, including members of my family, who have sacrificed by offering themselves in military service. A special acknowledgement to those who lost their lives as casualties of war and to those who returned wounded in body or soul or both.  May you always be remembered and may your sacrifices be respected and honored.

I referenced this verse nearly ten years ago when I spoke to the church on the day of my installation as their lead pastor. It’s now been more than a year since I stepped away from that role, but I often revisit what the Paul the Apostle said about himself so long ago.

Given his past violent opposition to Jesus Christ and His Church, Paul was keenly aware of the paradox of his elevation to apostleship by Jesus. He knew it didn’t make sense when viewed through human eyes and considered through human minds. That is why he prefaced his statement with the acknowledgment that this was because of GOD’s grace alone. By grace, he was transformed 180º to become one of the Lord’s most passionate advocates and ambassadors…so much so that it eventually cost him his life. “This is what I am!” he boldly declared. And his declaration went far beyond defining what he did; he was defining what he now was, his core identity. That’s what first attracted me to this verse, and still attracts me.

Common wisdom is inconsistent on the idea that you are what you do vocationally. On the one hand, some of the most wonderful gifts given to the world have come from those whose commitment to and passion for their vocation eclipsed virtually everything else in their lives.  Gifts of art (Van Gogh and Picasso), music (Mozart and Miles Davis), literature (Shakespeare and Garcia Márquez), science (the Curries and G. W. Carver), great inventions (Marconi and Edison) and the many other men and women who mastered their talents to produce such gifts come to mind.  People like Mother Teresa, who left a life of wealth and ease to love the unlovable of Calcutta for the sake of Jesus, stand out as being fully defined by what they did.

I also have met many people who are so much more than what they do occupationally, and who often wished others knew that about them.  I’ve seen too many obituaries which note the deceased person’s former occupation as the first thing right after their name. I’ve often wondered if that is how they would have wanted to be known by the world.  There was a time I felt that way, knowing that I was more than what most of the world saw. I no longer feel that way; I am what I am by the grace of GOD; a shift happened; and what I am is not distinct from what I do. 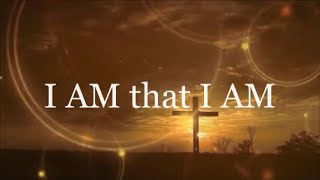 In two notable places in Scripture, the Divine is referenced as I AM. GOD identified Himself to Moses as I AM on Mt. Sinai (Exodus 3:14).  Jesus said the same thing of Himself in one of His many back-and-forths with the Scribes and Pharisees (John 8:58). These were unmistakable declarations of self-identification. They were also introductory statements to the work that GOD does: I AM who gives life; I AM who saves; I AM who sanctifies; I AM who provides; I AM who defends; I AM who loves, I AM who reigns, etc. The identity of GOD (Father, Son and Holy Spirit) is never separate from the work of GOD.  Why should it be? He loves His work; and it is all good.

Perhaps Paul’s use of that phrase to define himself (“I am who I am…”) was his way of identifying his life with the life of GOD and his work with the work of GOD.  After all, he did say that we should be imitators of GOD in lifestyle and work (Ephesians 5:1), something made possible by GOD’s grace. I believe Paul loved his work; and it was good.

Being an image-bearer of GOD is more than a spiritual identification tag.  To bear GOD’s image goes to the very nature of being a Christian. It is to allow the I AM in us to be made alive by His Spirit; it is to be transformed by I AM; it is to obey I AM; and it is to do the work of I AM by being a little I am by the grace of GOD.  Is this not the pathway that will make good what we do?