Toward the end of the movie, The Color Purple1, a principal supporting character, Shug Avery, is reconciled to her estranged pastor father and he to her.  Shug is a strong-willed and very talented singer who years earlier had left the church and singing with the choir for the “fast life” as a club singer, along with other lifestyle choices that deeply angered her father.  A seemingly insurmountable obstacle had grown between the two of them, what the Bible calls a wall of separation.

In the scene I’m thinking of, Shug had returned home after having been away.  She and her friends, some of whom were musicians, were picnicking on a beautiful Sunday.  They were not too far from her father’s church.  She is entertaining everyone, singing a jazz number and the musicians are backing her up.  Cut away to her father standing in his pulpit, preaching.  It was a warm day, and the church windows were open.  Some of the congregation could hear her singing in the distance.  One woman interrupts the pastor to ask the choir to sing, God’s Trying to Tell You Something2.  The choir begins. For a moment, Shug and the choir are singing over each other.  Then Shug, something pulling at her heart, begins singing with the choir from a distance as she begins walking toward the church.  The musicians join in as the crowd moves with her.  Her father, recognizing her unique voice, looks up surprised but with longing for his daughter.  She walks through the doors of the church; the choir soloist steps back to join with the other choir members as Shug assumes the solo part. Everyone is transfixed as, still singing, she approaches her father, tears streaming down both their faces as they hug, and she whispers in his ear, “See daddy, even sinners have souls.”  The church erupts in joy at their reconciliation.  This is a GOD moment. 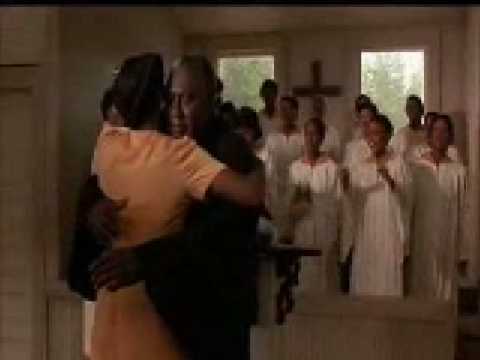 I’ve seen that scene many times, and am always captured by it.  To say that it is powerful is an understatement.  More importantly, it reinforces for me my belief that GOD is always trying to tell us something.  He had something for Shug to hear and He had something for her father to hear.  I believe He has something for you and I to hear.  The question for us is whether we have ears to hear what GOD is saying.  We only develop this ability by actively caring what He has to say, and setting aside those obstacles that interfere with our receptivity to His voice.

In the strange times in which we live, when emotional tumult and people living at cross purposes seems to be not only the order of the day, but common to our time, and when interior peace is a precious commodity hard to find and keep, what if GOD is trying to tell us something?  This morning I was drawn to reread Psalm 46, which begins by reminding us that GOD is our refuge and strength, a very present help in time of trouble (as opposed to the strategies we’ve self-created or modeled after other people).  The psalmist goes on to list some incredible hypothetical catastrophes that would cause people to tremble in terror if they actually happened.  It is here that GOD says, through the psalm, “Even if the very worst you can imagine happens, relax; don’t get yourself all worked up.  Remember who I Am.  At the right time, everyone will know who I AM, and they will exalt me.  But for now, I want you to remember, and trust me to care for you in the midst of your earthly reality.”

I find myself in a lot of conversations these days in which people are upset over things far beyond any of our control.  My flesh wants to be upset too.  I want to shout at the wind, too, “Why must this be!”  But then I remember Psalm 46, and rather than help fan the flames of discontent and discord, I want to be a peacemaker for Christ’s sake.

Maybe GOD is trying to tell us something.  Just sayin’.

2 thoughts on “GOD’s Trying to Tell You Something”